From the opening keynote of HIMSS16, I’m always enthralled with the size of the event and what the HIMSS team based out of Chicago has to work on all year to make the event a great one. From making sure that the speakers are great to working on the logistics and the events within the event, it is a spectacle like no other. This time, I had a few newbies to the event that were more enthralled than I was (which is certainly something to behold). I must say though, that the opening keynotes were interesting as the audience first heard from Sylvia Matthews Burwell, Secretary of Health & Human Services and Michael Dell, Chairman and Chief Executive Officer, Dell Inc who spoke in a “fireside chat” between him and Mark D. Barner, Senior Vice President and Chief Information Officer, Ascension; Chief Executive Officer, Ascension Information Services. Right after the opening keynote, we went to the vendor area on the first floor for the reception that allowed us to mingle with the smaller vendor booths, which for startup organizations or those that wanted to have conversations with their potential buyers, was a great idea by HIMSS. Kudos to whomever thought of it.

The Interoperability Showcase this year, which was what I was most eager to see, didn’t light up my interest as it had done last year. During my conversations with the team at HIMSS at the HIMSS Spot location (it’s usually located at the center of it all), I understood that the conference had probably attracted somewhere around forty three thousand people which is on par with what I had expected.

On Tuesday March 1st, one of the first sessions I attended was titled “Actionable Analytics: From Predictive Modeling to Workflows” which was presented by the awesome team of Ari Robicsek, MD (Vice President, Clinical Analytics) & Chad Konchak, MBA, (Director, Clinical Analytics) from Northshore University Health System in Illinois. They really fired up the imagination of the audience when they were able to show the progression of flu on a map on the screen that had the audience very impressed with the work that they did. This session was so packed that there were people sitting on the stairs as it was so in demand. From sessions on analytics, process improvement, Office365, constructing a new hospital organization from the ground up where Sajid Ahmed, CHCIO, (Chief Information & Innovation Officer, Martin Luther King, Jr. Community Hospital) in a neighborhood that needed it badly presented a great story of personal and community achievement in”A Connected Hospital and Connected Community Partnership”, visiting the exhibit hall and getting in some networking while we were at it, this conference was one to remember. Oh and the DeLorean below was one that I’d like to take back to Monday, February 29th, 2016 and try and go to HIMSS16 over again and try and see some of the sessions that I would have liked to if I was able to be two places at once!

The story so far from HIMSS16:

Sylvia Mathews Burwell from HHS spoke at the Opening Reception of the HIMSS16 conference and talked about some of the great work that organizations like Davies Award Winner OSUMC are doing along with saving nearly $7.7 million.

The Dell fireside chat did not go as well as was expected with a number of people walking out of the session in the middle due to what I heard was, sadly not a very interesting conversation that captured the spirit and enthusiasm of the conference. It seemed like more of an advertisement for Dell than anything else.

In addition, today I’m heading through the Interoperability Showcase which I enjoy going through. The basis for everything this blog is all about 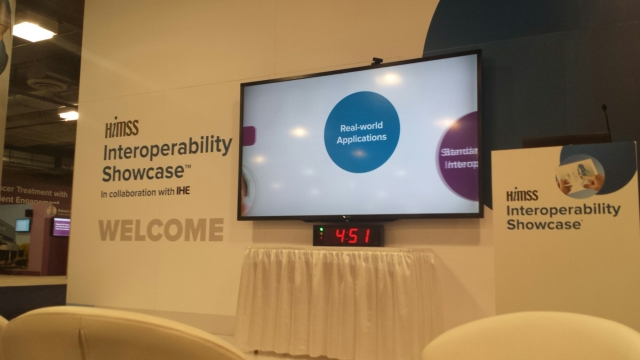